When theatre is pure magic

I belive in theatre. I mean, who doesn’t? I remember going to see Shakespeare’s Hamlet (Amletas) by a Lithuanian absolute genius whose name is Eimuntas Nekrosius some ten years ago. It lasted 4 hours and it was in Lithuanian, which I did not know otherwise I think I would have stayed home that night ;-). Well, I still remember that night. I got goosebumps all through the performance; I got back the night after to see the play again and I started studying Lithuanian… so much I had loved the pure magic that Nekrosius and his company had spread all around.

I even studied acting in an amateur company (a long time ago… seems almost a lifetime!) and got to perform Ophelia in some sort of ‘Highlights from Hamlet’ show and got ‘world-famous in Pesaro’ (ok, you got me, these are two quotations from Mel Brook’s ‘To be or not to be’, being the second quotation of course ‘world-famous in Poland’! ok, it’s not Shakespeare but still Mel Brooks comes in handy sometimes… ‘Young Frankenstein’ is my favourite!).

Anyway, since Costanza was born we never miss an opportunity to take her to theatre. In Summer we take her to the open-air ‘Gran Teatro dei Ragazzi’ along the sea-side; in Winter we take her to ‘Andar per Fiabe’ (literally: walking through fairy tales). It is a cycle of plays for children performed by top quality companies that are specialized in theatre for children.

On Sunday we went to see a beautiful play, Aquarium, by Fondazione Onlus Teatro Ragazzi e Giovani from Turin. It was a fascinating dive into a submarine world following Jules Verne’s footsteps. Using simple recycled objects such as pipes, rubber gloves, pins, boxes, funnels and scrubbing bushes, three young actors guided us across the ocean floor introducing to us many species of fish and under water creatures. It was an amusing and educational play. But what I liked the most, was the pure magic that the company created using simple ‘everyday’ objects combined with wit, humour and poetic sensitivity.

My ticket to the play! 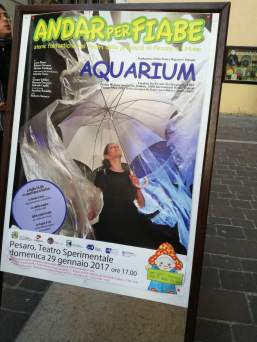 Aquarium – poster in front of the theatre