Places with a soul

I attended an interesting conference in Candelara a few days ago dealing with the theme: ‘The village, a moving tradition’ which in Italian sounds ‘Il paese, tradizione in movimento’. I don’t know how it is where you live; here, in the surroundings of my home-town Pesaro, in Italy, you cannot throw a stone without finding a Middle Ages hilltop village or a Romanesque church or Roman remains. Many of these beautiful villages, that were prosperous until some 50 years ago, have lost their vitality though. In a few of them no more post office or doctor service are available, nor banks or restaurants or shops. The elderly are the ones who preserve many of our borghi from turning into ghost villages.

And yet, our community is wondering what can be preserved of the stories, memories and traditions garded by these villages, and how is it possible to attract people there to keep borghi not simply ‘alive’ but capable of hosting visitors and tourists all year round.

Of course, many are the initiatives organized by local associations (I’m thinking here of ‘Candele a Candelara’  – ‘Candles in Candelara’ engaging tourists from all Italy over a few week-ends before Christmas). However, the point is not simply that of organizing sporadic events (many are the ‘sagre‘ in our country using typical local products such as chestnuts, truffle, fossa cheese to draw people to villages); the point is that of creating a network between institutions, associations, restaurants, farmhouses, bed&breakfast, local producers and the inhabitants themselves. 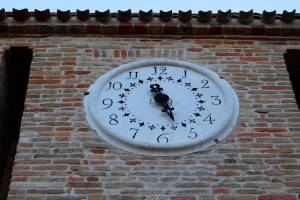 We Italians say that we live in the ‘bell-tower country’ (‘il paese dei campanili’), meaning that each village has its own church with its own bell-tower, and that each village or town just cares about their own place. Words like ‘networking’ or ‘team building’ or ‘consortium’, the latter as far as enterprises are concerned, rarely apply to our country where each person cares about his or her own garden (‘ognuno guarda al suo orticello’).

Now the time has come to gather and try to think ‘big’. Villages should gather in joint initiatives. And there is a beautiful project, laDirce, that managed to gather different villages into one single event through its ‘dinners at home’. I guess this is why Cristina Ortolani was invited to speak at the conference ‘the village, a moving tradition’ in Candelara, together with other local experts.

Cristina so often likes to speak about the ‘genius loci’ each time she writes a book or organizes a guided tour or an exhibition in one of our borghi in the hinterland. What is a ‘genius loci’? Well, according to Roman religion a ‘genius loci’ was the protective spirit of a place but today we use it also to describe a typical atmosphere you breathe in a certain place, which is typical of that place and that place only.

And what about where you live? Do you feel a ‘genius loci’? And where or when do you feel it? To me, when I get back to Ginestreto (the hilltop village where my mother was born in the hinterland between Pesaro, on the Adriatic coast, and Renaissance Urbino close to the Appenines) the ‘genius loci’ is in the village cafè (bar) once owned by my great-grandparents. Actually it was much more than a bar… it was an ‘osteria’, a meeting point, a bar, a shop. Today it’s pretty depressing but to my eyes it is the greatest ‘osteria’ ever– note that when I was born it had just turned into a ‘simple’ bar, and my recollections are those told by my mother… such is the power of other people’s recollections and memories. This is why people must keep on telling stories.

So that nobody (and nothing) really dies forever.